K-FEST is a dynamic arts festival with an emphasis on emerging artists and unoccupied spaces in Killorglin, Co. Kerry. The festival transforms vacant retail outlets, deserted buildings, and even domestic homes into curated bespoke pop-up galleries and venues over the June Bank Holiday weekend. A group of passionate and committed artists, business people, educators, and volunteers from all walks of life make up the K-FEST team and they drive everything including the annual crowdfunding campaign on Fund it. 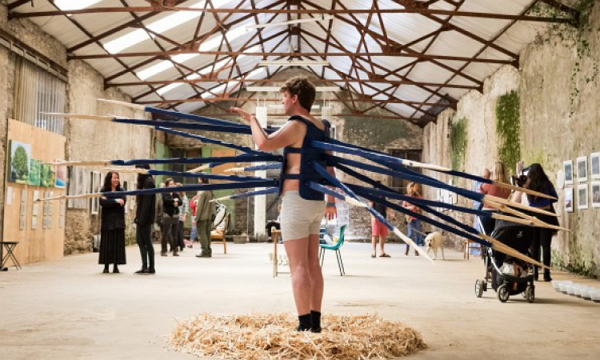 As a volunteer organisation, contributions via Fund it help K-FEST bring to life on the national cultural stage. To date, Fund it has consistently been one of the main sources of funding for K-FEST. Since their first campaign on Fund it in 2014, they’ve raised over €32,900 from 595 pledges – many of these are the same funders every year! With such dedication we thought it was about time we shared the inside track on this dynamic festival in the kingdom of Kerry.

How has your crowdfunding experience of running the campaigns changed over the years?
Raising funds via crowdfunding can become a regular tactic if done effectively. K-FEST has consistently promoted their crowdfunding campaign every year and been successful in reaching or exceeding their target. Fans and followers know it’s coming down the line and understand it’s a core part of the festivals model. “It’s a little easier as it’s now annually expected and funders don’t want to miss out on the rewards.”

What has worked/not worked during the campaigns?
K-FEST has learned that if they build it, their fans won’t just come. “Creating the campaign and waiting for funders does not work. It requires regular promotion throughout the campaign, via social media, emails and personal requests.”

Creating exclusivity around rewards through their crowdfunding campaign has given K-FEST the edge by promoting the novelty factor and generating more demand. “If the rewards can be personalised and designed for a particular year it makes them more exclusive and appreciated, For example we have mugs with the funders name and a design with the year of the festival. Nobody wants to miss having next year’s mug and it is only available through Fund it.”

What is the most important element in your campaign planning phase?
PLAN AND BUDGET! “Getting your text and images and videos and prizes organised and ready to create the campaign. We make sure our cost of rewards and Fund it fees do not exceed 20% of what we take in through Fund it. Sometimes this means not offering a reward we would have liked to, but there is no point in running a campaign if most of what you take in goes on rewards.”

What is your TOP tip for creators thinking of launching a crowdfunding campaign?
“If you have a committee get them all to put something in to get the ball rolling. People like to put money into something they think will succeed or reach its target, so it’s important to give it some momentum at the start.”

What’s your advice for anyone thinking of running multiple crowdfunding campaigns?
“Work on getting funders. Facebook, email and Instagram campaigns are good to have there, but especially in your first year you need to make personal requests to get people on board, and encourage funders to recruit more.”

What has surprised you most about the crowdfunding process?
The loyalty of funders from previous years who come back again and again.

What impact has Fund it had on K-FEST?
Fund it is one of the top single sources of funding for our festival.

What’s next for your creative journey?
As a volunteer committee we will only know that when we get stuck into organising K-FEST 2020 towards the end of this year

So there you have it. Planning, budgeting and creating exclusivity are just some of the tactics used by seasoned crowdfunding teams. To find out more about how to plan your campaign, check out our Creator Handbook or contact our team of crowdfunding experts to day support@fundit.ie