At the end of 2020, Ursula Kane Cafferty successfully ran her Fund it crowdfunding campaign to create a brilliant new board game for all the family. Ursula garnered support from 110 generous funders, raising €10,750 to produce ActiVacation ®. We caught up with Ursula and asked her to share some thoughts about her campaign. 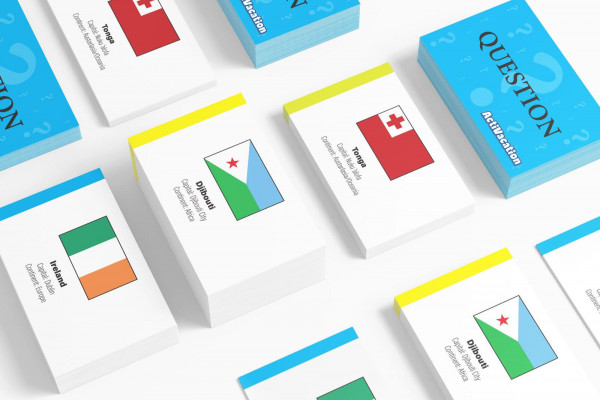 It all began with the term ‘Staycation.’

While reading a newspaper article at the start of the recession, in 2008, about the number of people who could no longer afford to go abroad on holidays, the brainwave for the board game ActiVacation ® began to develop. The inspiration for the name itself came from the words ‘active’ and ‘vacation.’ Merging the two together, the name ActiVacation® came into being. A home-made prototype followed soon after.

It was 12 years, and a lot of half hearted attempts later, that I looked at the possibility of developing and manufacturing a limited edition of 500 games, seriously. Enter Fund it! As soon as I committed to the crowd-funding campaign, the project brought on a new form of excitement and there was no going back from that point. Opting to partially fund the project myself, my Fund It target was set at €10,000 (about 60% of the estimated cost). The campaign went ‘live’ at the end of January 2020 and ran for 6 weeks.

1. What was the most important element of your campaign plan?

Work, work and more work – starting with setting up and finalising my Fund it page with background information, photographs, rewards, links to social media accounts etc. It was essential for the hard work to continue throughout the entire 6 week campaign and it did… so much so that I hoped I wasn’t boring people. Listening to the advice of Michelle and the Fund it team was essential. Knowing they were available for support was of huge benefit to the campaign, the knowledge and understanding they offered was a crucial element of my campaign.

2. What worked during the campaign / what didn’t work?

It turned out, I wasn’t boring my audience as the fund kept topping up, this being most notable after media exposure of any kind. Every donation helped bring ActiVacation one step closer to becoming a reality and Funders seemed to enjoy the story of the game.

I successfully used social media to get the word of my campaign circulating in the eyes and ears of the public. With that in mind I contacted national and local media and the interest and generosity of those in radio and print was a very pleasant surprise. I was not successful with TV, which was disappointing at the time, but it didn’t actually matter in the end!

3. What surprised you most about the process?

I was most surprised with the generosity of strangers. Firstly, many of those who funded the campaign were total strangers and others who did so generously and anonymously were amazing. Secondly, the continued support for the game by many in local, social and national media was a delight. For most of them ActiVacation wasn’t just a ‘once-off’ story, they followed up and continued to promote my campaign throughout the duration, and even since the end.

4. What is your TOP tip for creators thinking of launching a crowdfunding campaign?

My top tip for creators is to think carefully about their rewards.  For instance – one of my rewards costing €10 was to have someone’s name included as a funder in the rule book. Some parents would have purchased four of these rewards – one for each child in the family and I found that was not possible to do.

5. What impact did Fund it have on your project / creative journey?

Fund it enabled me to have a financial cushion throughout the many changes which became necessary as a result of Covid-19. My campaign ended successfully on 4th March 2020.  What a relief and delight for all that hard work to have paid off! However, this date coincided when the true reality of the Coronavirus was sinking in here in Ireland.  By the time I had received my funds and ActiVacation® was ready to go to production, Covid-19 was declared a pandemic and the country was about to go into lockdown. This was potentially devastating for my project and the daily toll of deaths were mounting up, so gaining a sense of perspective became extremely important.

As time progressed the word ‘staycation’ became a buzzword all over again and ActiVacation’s stated aim of getting to the airport to go on a virtual trip around the world during a pandemic seemed ridiculous. In real life people abroad were struggling to get flights home to Ireland from far-flung parts of the world before lockdown was to be introduced. So the wording of the game was changed to adapt to the strange times we found ourselves living in. Penalties and document cards were adjusted, words such as masks and visors, temperature checks, travel restriction and social distancing were introduced and the new aim of the game was born.

Fund it allowed me to have breathing space during one of the strangest times in a generation, as I approached going to manufacture and production on what for me was an enormous undertaking.

The fact that I had the faith of so many meant that all thoughts of procrastination had to be banished as the project progressed. Having other people’s money in my account meant that failure was not an option. It certainly helped focus the mind that over 70 games were pre-sold, easing any worries I may have had about the level of interest in ActiVacation.

6. What’s next for your project / creative journey in the midst of Covid-19?

I am extremely happy with how everything went for ActiVacation, from the very first day I contacted Fund it to make enquiries, to the present day. If you had told me that I would manage to sell over 90% of the limited edition between September and Christmas without being able to hold a launch party and with absolutely no access to my planned markets, I would not have believed you.

The feedback has been excellent.  I know that  families have been enjoying their efforts ‘to get to the airport for a flight home before lockdown after the virtual trip of a lifetime around the world’! While the game itself may be developed further into the future, there will never be another edition which so very specifically relates to the strange year that was 2020. Now that the game is in the public domain and the name ActiVacation is easily recognisable, my future plans include developing a singularly Irish version using identifiable sporting landmarks for the activities and who knows what the eventual destination (whether real or imagined) will be! Watch this space.

Thanks to all who supported me in any way throughout this journey.  It has been amazing! And finally, there are still some games available for sale via activacation.ie. All enquiries welcome.