In 2019, Irish mezzo-soprano Sharon Carty and Texan pianist Jonathan Ware recorded their first disc together, an album of songs by Franz Schubert. With the support of 131 funders, they raised €11,580 and launched the album in May 2020. We asked Sharon to share some insights and lessons learned from her crowdfunding campaign on Fund it. 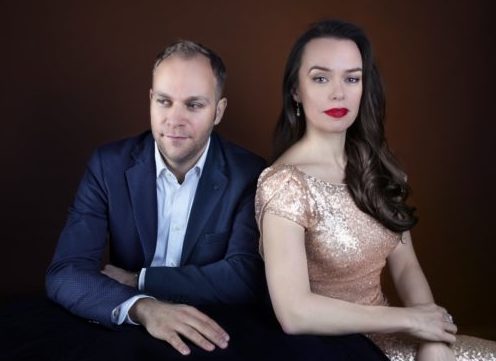 Without a doubt social media. There were two elements to this. Firstly, having plenty of content (photos, videos, sound files) to share on the various social media platforms over the course of the campaign. Secondly, related to the first, was the importance of supporters and followers on social media sharing those posts to increase the reach and keep the campaign visible. That said, some funders funded the project even though they weren’t on social media, so don’t discount email, word-of-mouth and networks or solely focus on Instagram, Facebook, Twitter, etc.

Each week, I tried to have one main focus for the project on social media. I’d focus on this for 2 – 3 posts per week to keep the project visible. I made the decision to start the Fund it campaign a couple of weeks before we started recording the CD, so that I was able to send out the information about our plan in the initial weeks.

During the moderation process, the Fund it team was so supportive about my project. After discussing my campaign plans, they were confident I would reach my target. I was so impressed with their level of experience and understanding of my campaign, not knowing me or my follower base. I was in shock when we actually hit our target! It seemed like such a huge amount of money at the start and it was unbelievable to see the total steadily rising until we reached the target with just a couple of days to go.

After you’ve planned your project carefully, pay very close attention to the advice the Fund it team provides in terms of tailoring your rewards and the reward levels. They are experienced at helping creators get their projects funded – listen to them!

The impact of Fund it has been incredible – it made possible a project which I simply wouldn’t have been able to finance otherwise. The recording industry, especially in classical music, has changed so much in terms of digital output as opposed to physical CDs. Labels aren’t prepared to fund recordings now, so the financial burden usually falls on the artist. Given what’s happened with the current crisis I’m more grateful than ever to Fund it and the brilliant people who supported the project, as it would have been financially crippling had I tried to finance it myself.

The next immediate phase will be to see how the recording will be received online by audiences and critics now that it’s been released. After that the next stage will be to perform recitals with the CD repertoire, however Covid-19 is making it uncertain when that will be. We had planned some really lovely recitals all over Ireland and in Germany between now and Christmas, so it’s unclear whether any of those can go ahead. We are looking forward to performing the songs live, in particular for the fans who helped make the CD possible. I have this beautiful new album to focus on at a time when none of us can perform in public. I’m excited to hear what the critical reaction will be in the press and from the general public now that it’s been released.