Eating Scenery is more than a documentary.  It is a film for anyone whose identity is linked to a place they call home.

This will be the story of the Killarney people, their passion and love for one of the true wonders of Ireland.  An inspiration for musicians, artists and writers. A place that played an important role in Ireland's history.  We intend to celebrate the Park but we also want to highlight the challenges National Parks face in Ireland. You will experience daily life through the park rangers, the hospitality industry, the visitors and the residents who have seen the changes over the years. With your help to meet our Fund it target we shall be filming in September, interviewing Killarney people, local groups alongside national organisations such as An Taisce & Irish Wildlife Trust who are supportive of the film.

The goodwill we have received from Killarney and the diaspora in UK and USA has been heartwarming and encouraging. Crowdfunding is an excellent means to engage with potential audiences for when the film is ready to be released.  We want our supporters to feel this film belongs to them as much as to us the creators. We are speaking with potential sponsors for the Killarney World Premiere and London Screening.  We will keep you updated with our progress towards hitting the target and we hope you like the wide range of Rewards we are offering too?

We are incredibly grateful to all those who have supported us so far and who believe in this project as much as we do. We know this film will make a difference. Let's get it made! Please also visit our website for more information: www.eatingscenery.com

THANK YOU ALL SO MUCH! 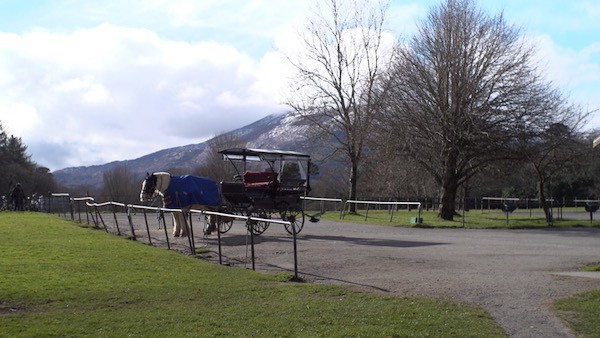 Unless something amazing happens in the next 10 or so hours it seems we won't reach our target.  The team wants to express our gratitude that you all wished to support us - it means alot. Fund It have been great and we should probably have started our fundraising after building up a head of steam in advance so a lesson learned there.

We also want you to know that we are going to fulfil, through personal funds, the basic production part of the film so it will be 'in the can' as they say.  Post production and marketing costs we hope to raise through matchfunding or grant applications.  Please continue to follow us on FB, Twitter or through our website.  You can email the Producer, Liz Grant, who can put you on a newsletter list if you wish: liz.grant910@iCloud.com. We believe in this film and it will get made only not as soon as anticipated.

Many thanks again to you all.

We have been making real nuisances of ourselves, tweeting, FB-ing, letter writing, calling and tweeting like crazy.  It has really been an interesting experience crowdfunding and we have learnt a great deal.  Fundit have been really great to deal with and have been very supportive.  We still have our fingers crossed and maybe we will at least reach half-way or some last minute Excutive Producers will sign up!

Everyone on the team is dedicated to getting Eating Scenery: The Killarney Story made one way or another.   It may take a little longer than planned but it will be worth it.  Filming in the Spring in Killarney will be lovely. We'll bringour waterproofs!

Just over two days left so spead the word - you never know!

A big thanks to Majella O'Sullivan who wrote a lovely article in Kerry's Eye newspaper about our Producer's family connection to Killarney through her mother and father.  It explains many of the personal reasons why she wants to make the film.

We have had tweets  by our supporters in Ireland, UK, the USA and many retweets by An Taisce and Irish Wildlife Trust for which we are very grateful.  It is so good to get the attention and spread the word about the film and the Rewards available.  We really need this support to translate into reaching our target.   Not long now so please continue to spread the word and encourage others to support this great project.

Look out for an article in Irish World soon too!

Dear Supporters,  In the last week or two there has been a great deal of coverage in the Irish press about issues affecting the Irish environment.  Firstly, the Irish Parliament has passed the Heritage Bill.  It was greeted with dismay by Birdwatch Ireland. The passing of the legislation expands the period during the year allowing for the burning of vegetation and the destruction of hedgerows signals a weakening of the laws protecting bees, birds and other animals. Secondly, the Irish government has put in a €257m bid to protect the National Parks. The Irish Examiner published an excellent article.  Although this may sound good, sadly, it is not because several important factors are not covered by it which will essentially undermine the expenditure.  It is apparent that organisations such as An Taisce, Irish Wildlife Trust and Birdwatch Ireland have not been listened to.  More than ever the voices of those who really understand the challenges and know what should be done need to be heard.  Our documentary will do that.  Please continue to spread the word and encourage folks to sign up to the Rewards.  Be in touch again soon - thank you all.

So excited that we now have two Executive Producers on board - they are going to love their time in Killarney!

We have been speaking with the Irish American Diaspora and stirring up quite a bit of interest due to the amount of US citizens who travel to Ireland every year to visit 'home' to catch up with friends, family or just trace their heritage.

Elizabeth, the Producer has kept up her research into the environmental issues and has spoken with some great folks who are highly knowledgeable and passionate about the National Parks of Ireland.  This is a critical time and more than ever the challenges need to be addressed. The documentary 'Eating Scenery' will do that without doubt.