Mote Park, a Time and a Place

A refuge of natural beauty, Mote Park is an area that is steeped in history and is home to many species of flora and fauna. Situated in a forest setting of 650 acres just outside Roscommon Town, it was the seat of the Crofton Family from the 16th century up until the 1940s.

Mote Park in its current state is at a crossroads with its future hinging on decisions about what the area means to the people of Roscommon. Is it primarily a forestry area? If so, what happens if forestry is ever privatised in this country? Should resources be allocated to preserving its architectural features? What would happen to the area if there was amenity investment and it were to become a heavily marketed tourist destination?

We want to chronicle some of the history of the area, introduce viewers to its vibrant, raw beauty and diverse wildlife, interview those with stories to tell, before memories of another generation are lost, and meet with the major stakeholders of its resources to ask them of their plans for Mote Park.

The film has the backing and ‘blessings’ of Mote Park Conservation Group and we will work closely with them throughout the production of the documentary. A spokesperson from Mote park Conservation Group adds “we are delighted to be associated with this documentary which we feel will capture the Mote Park story from times past to present day, including its wildlife, its history, and the people and organisations who have had an influence on the area over the years. The fact that this production is being undertaken by Mimar Media, who have local knowledge of the area, will give the production an added dimension”.

How Much We Want and What It’s For

We are looking to raise €5500 through Fund it to pay mostly for the production of ‘Mote Park, a Time and a Place’. We envisage it will be a 40 to 50 minute film which will involve approximately 20 days filming, some of which may involve travel to the UK and 30 days editing. We will be using our own equipment and we aim to do the producing, research, filming, editing, mixing and output ourselves. Some of the funds will also go on the design of the DVD, copyright for photos and documents etc. and the opening night screening (we may also ‘bravely’ enter it into the Film Festival Circuit for other screenings if the subject content is appropriate for inclusion)

As a generous contributor to ‘Mote Park, a Time and a Place’ we have some fantastic rewards on offer: from a big thank you from us right up to an Executive Producer Credit with invites to the documentary premiere screening in Roscommon, a Guided Tour of Mote Park, a ‘Thank You Reception’ with the cast and crew and a piece of art work depicting Mote Park by a local artist.

Whatever support you can give us, we are very grateful. Thank you.

Halfway Mark - only 26 days left to reach our target!

Hi everyone, We’re at the halfway mark of the Fundit Campaign and we’re at 15% of the target amount. Thanks to everyone that has contributed so far! We had a fairly intensive media campaign (social media and local press) up and running from the beginning so we’re hearing a lot of people saying that they are aware of the project and think it’s a good idea which can only be a good thing. There are posters up and around Roscommon Town and Mote Park itself and they all have a QR code that people can scan with their smart phones to link directly to this site. Most of our personal and business contacts have been emailed and we have been in touch with at least 80 local Roscommon businesses as well as a few national organisations about getting their support. Encouraging people to financially support projects in the middle of a recession is never going to be easy with so many demands on their resources, so we are genuinely grateful for any contribution. We’re hoping to start the documentary preproduction meetings and phone calls next week to start lining up interviews and scouting locations for August when the Fundit campaign is over (See, I have faith in this campaign and reckon we’ll make the target!) So, we will continue the push onwards and upwards to ensure we secure our target - remember, if we don't reach our goal we lose what has been pledged so far. Don’t forget to spread the word (facebook, twitter, linkedin, email and old fashioned word of mouth) and encourage others to place a pledge (no matter what size!) Thanks again for your pledge and support, we couldn't do this without you. Martina & Michael 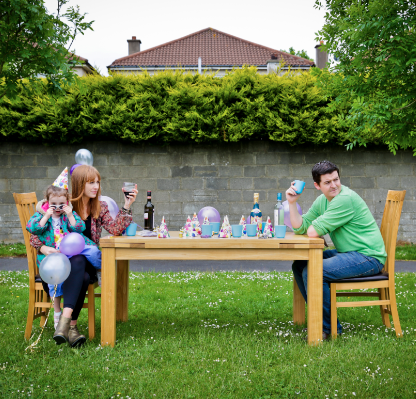